Bishop Gruss discusses listening, knowing and doing God's will in message for first week of Advent 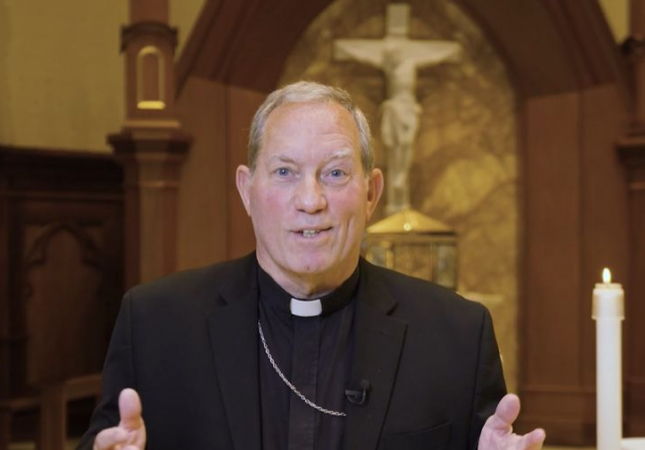 Greetings and blessings to you all. It is hard to believe that we are beginning the season of Advent. All around us, we already see the external signs of Christmas. They are everywhere and have been for quite some time. Let’s not let ourselves be drawn into the Christmas mode by forgetting about the season of Advent. It would be very easy to do so, and perhaps without even noticing it.

The event of Christmas – Jesus coming into the world – was the most monumental event in the history of the world. But before the birth of Jesus, even before the Incarnation of God, there were some important events which allowed the Incarnation to happen. But those events would have never happened if certain individuals did not engage their “listening heart.”

Throughout this Advent season, I would like to reflect upon the “listening heart” of some of these important people who have played a role in salvation history and what they can teach us as we prepare for the coming of Christ at Christmas.

As we know, Sacred Scripture doesn’t record a single word from the mouth of St. Joseph. But every decision he made was carefully discerned as he sought the will of God for his life. True discernment takes place in a silent, prayerful disposition of a listening heart that is always seeking the Lord’s will. That is key – desiring to know the will of God and choosing it no matter the circumstances. One must have an engaged listening heart in order to discern the will of God in their life.

God revealed his saving plan to Joseph by using dreams – which in the Bible and among all ancient peoples – were considered a way for God to make his will known.  As we know, Joseph was deeply troubled by Mary’s mysterious pregnancy. He did not want to “expose her to public disgrace”, so he decided to “dismiss her quietly.”  But an angel helps him resolve his grave dilemma: “Do not be afraid to take Mary as your wife, for the child conceived in her is from the Holy Spirit. She will bear a son, and you are to name him Jesus, for he will save his people from their sins.”

Joseph’s listening heart, where he desired to know the will of God in this particular situation, gave him the courage to respond immediately to what was being asked of him. When he woke up from sleep, he did as the angel commanded him. Which means that his discernment was followed by obedience.  Obedience made it possible for Joseph to overcome his dilemma and spare Mary in the process.

In fact, in the Litany of St. Joseph, one of the titles given him is Joseph Most Obedient. The word obedience comes from the Latin word ob-audire which means “to hear” or “to listen to.”  But there is a great implication here, that after having listened to the Word of God, a response in action is required. In other words, if we have sincerely sought the will of God, we cannot sit on the fence.

The most liberating experience known to the human person

Obedience is a word that challenges many people. In our culture today, it is implied that obedience takes away one’s freedom. From a scriptural and spiritual standpoint, this is far from the truth. God’s Word is a message of faithful salvation, unfailing presence, constant companionship, and infinite love, mercy and affection for the believer. Obedience to God and obedience to his Church is the most liberating experience known to the human person. Why is this? Because at the heart of true obedience is love.  There is only one proof of love, and that proof is obedience.  Joseph was obedient to the message of the angel because of his love for God….and for Mary.

In the second dream, the angel tells Joseph to take the child and his mother, and flee to Egypt, and remain there until further notice because Herod was in search of the child to destroy him. I can’t imagine what must have been going through Joseph’s mind. But Joseph did not hesitate to obey, regardless of the hardship.

As we know, Joseph waited in Egypt with patient trust that the angel would let him know when he could safely return home. Again, Joseph promptly obeyed. When it was time. he then took Jesus and Mary, and went to the land of Israel.  During the return journey, again, he was warned in a dream to go to Galilee where he would make his home in Nazareth.

Joseph’s discerning heart allowed him to understand the dreams as being messages from God that would allow him to protect Mary and Jesus. His prayerful silence was the primacy of his interior life. His silence was not just a “being quiet” if you will. It was an active way of listening to the Father. It was an active way of saying “I’m open, Lord, and I want to hear Your voice so that I can do your will.”

He can work even through our fears

Even through Joseph’s fears, God’s will and God’s plan were at work. Joseph, then, teaches us that faith in God includes believing that he can work even through our fears, our frailties and our weaknesses. He also teaches us that amid the storms of life, we must never be afraid to let the Lord steer our course. I don’t know about you, but at times, I want to be in complete control. Yet God always sees the bigger picture.

We all live in a very noisy world. Noise is not only in the things we hear, but noise is also the busyness of our lives. In a world that is so noisy, St. Joseph reminds us of how important it is to cultivate interior silence – to cultivate a listening heart.  St. Joseph’s prayerful silence enabled him to respond generously to God.

In this Advent season, when we are invited slow down and pray more, St. Joseph can teach us how to become a quiet person and an obedient believer so that we can listen to and hear what the Lord is asking of each of us.

Joseph can teach us how to cultivate a listening heart that leads to obedient love.  All we have to do is ask.

How to Listen to Our Podcast on Your Phone

Although you can listen to audio recordings (A.K.A. podcast episodes) using embedded players such as the one above, most people listen to podcasts using their smart phone.

What is a podcast?

How do I listen using my iphone?

How do I listen on my Android phone?

Subscribing allows you to download and/or listen to any of our recordings anytime for free. Subscribing means you automatically receive new episodes.