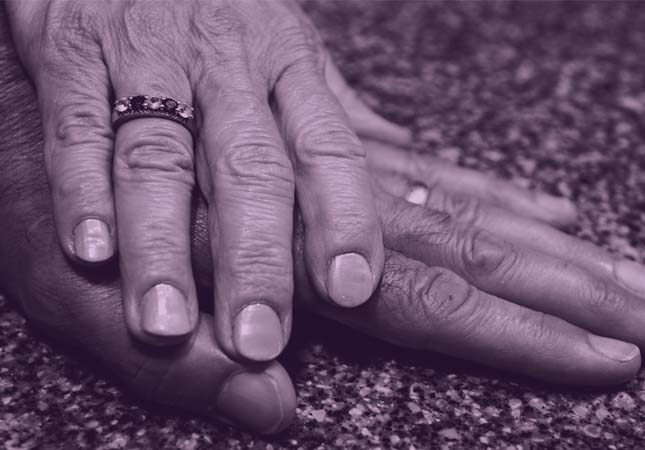 Anne wears a ring with three diamonds, signifying her living children, and two sapphires, signifying one child lost to abortion and one lost to miscarriage.
Diocese of Saginaw - Danielle McGrew Tenbusch

Editor’s note: This story contains descriptions of abortion and its effects. Some details have been omitted to protect the family’s privacy.

It’s been 41 years, and Anne still remembers the sound of the vacuum aspiration machine in the abortion clinic.

She begins to weep as she recounts the details of her experience—The silent drive to the clinic. Being taken away from her boyfriend, Dave, in the waiting room as she began to cry. Being given Valium to semi-sedate her. Breaking down in tears on the exam table.

She remembers no one offering her the chance to change her mind.

“At that point, it was the darkest. I just felt like I had to turn my back on God and my child,” she said through tears. She describes feeling paralyzed, helpless. “I just felt like I was in a black space, literally a black space. And I could feel … everything that was going on. … Then they go in with the machine … that was the most difficult thing, just hearing that and thinking, ‘this is not right at all.’”

She was taken into a recovery room after the procedure. A woman came over to reassure her, saying that Anne, who was 20, could have other children and things will move on.

“You’ll get over this. You’ll be okay,” the woman told Anne.

Then, finally, the infinite love and mercy of God broke through the pain to heal Anne and Dave’s hearts.

“I just wanted to reverse the clock”

Anne and Dave met while attending Central Michigan University in Mount Pleasant and began dating soon after. Almost a year later, in the fall of 1981, Anne realized that she was pregnant, despite being on birth control.

“I was thinking, … ‘I don’t know how I’m going to handle this.’ I knew (Dave) cared about me, but yet, I had these feelings of … insecurity and thinking, ‘if I tell him this, he’s just going to walk away,’” she said. “When I did confront him, of course he was panicked, too.”

Anne said she had hoped he would have said they’d get through this, but instead he offered to arrange and pay for an abortion.

“I was like, sitting there, like, in my mind thinking, ‘What am I going to do if I don’t follow through with this? He’s just going to leave me, and then I’m left alone with the situation. And how am I going to get through college?” she recalled, describing the anxiety building up as if she were going to explode. “I should have been my child’s voice. But at that moment, I was not my child’s voice. I just stood there and listened to everything he had to say.”

Anne, like many women facing unplanned pregnancies, was scared. She wondered how she could tell her parents. At the time, she believed it would have disgraced them and fractured their relationship, but as she got older she realized they would have helped her. She was also afraid Dave would leave her.

Dave, who married Anne after college, wouldn’t have left.

“That was my huge regret, leading up to this point, that — A, I didn’t explore things as well as I should have and B, I never told her that if you feel differently about this … I would still be here for you,” he said. “I just wanted to reverse the clock and go back.”

Anne estimates she was nine to 12 weeks pregnant when they drove to Lansing to get the abortion.

“When I left the clinic, I felt totally regretful—totally  regretful,” Anne said.

Both she and Dave were silent the entire drive home.

“Through the next months and years—like the rest of our college career—we kind of rededicated our lives in a more Christian direction. We got involved with InterVarsity Christian Fellowship … We started taking our faith more seriously. We became small group Bible study leaders,” Dave said. “And yet, we had this, this past thing.”

The two continued to deepen their faith and intentionally committed themselves to celibacy for a time before they got married in 1985.

When they returned to the Diocese of Saginaw a few years later, they focused on their Catholic faith. They got involved in their local parish, mentoring for marriage preparation and the pro-life movement.

But, as Dave says, “we never dealt with the issue at hand.”

That need for healing became apparent when Dave and Anne attended a Right to Life dinner.

“Talk about a trigger point,” Anne said. “The speaker was clearly identifying everything, and it all just came down on me
like a pile of bricks again. … I could not stop crying.”

At that moment, Dave realized how deeply the trauma of abortion continued to impact his wife.

“I put myself in a state of denial for periods of time, but that denial just created anger and hate and resentment, especially towards Dave,” Anne said. “It’s very hard for a woman to forgive herself.”

A nudge towards healing came from a Catholic radio station. Dave heard Beth Bauer (who now serves as the coordinator of marriage and family life ministry for the Diocese of Saginaw) was discussing an upcoming Rachel’s Vineyard retreat in Gaylord.

“She was just talking about post-abortion trauma and how these retreats help to bring people together and help them to understand the pain that they suffered, that they’re not alone,” he said.

The interview explained that the retreat was helpful, healing and rooted in Scripture.

“I listened to this and I thought, ‘Oh God, we probably have to do this. I don’t want to do this, but I know you’re pushing me to do this,’” Dave recalled.

While they weren’t sure they could do the retreat, both because they had young children at the time and it was a painful subject, Dave called Beth.

“She said, ‘This is something you really need to do, because … (God) is going to help you and your wife heal through this moment and heal your past,’” he said.

Dave and Anne agree that walking into the retreat was the “hardest steps, but the best steps ever.”

Like all Rachel’s Vineyard retreats, that weekend lasted from Friday evening to Sunday and included prayer, meditation, letter-writing, talking and sharing.

“So many of us had not told our story to anybody,” Dave said. “You’re just unleashing all this stuff; it’s all pent up.”

During the retreat, the facilitators guide participants through prayerful meditations of Gospel passages, such as Jesus with the woman caught in adultery or the woman reaching out to touch Jesus’ cloak.

Dave described how he struggled with feeling he didn’t deserve to be associated with their lost child. At the retreat, he heard the truth.

Dave had brought a photo of the couple’s three daughters sitting together, and he was looking at it as he wrote a letter to his child. He noticed that there was an empty space in the photo near the girls.

“I was picturing our son,” Dave said, choking with emotion, “with his arm around their back. … He’s there spiritually with them. One day, they will be all together.”

The retreat also includes a memorial ceremony. For each child lost, the parent or parents light a candle and place it in a bowl of water, signifying baptism, and give their child a name.

“A work of the Holy Spirit”

Although Anne had confessed the sin of abortion many times, she never forgave herself. Rachel’s Vineyard, she said, helped her come to terms with what happened and forgive herself. A meditation on what their child might say to her was particularly impactful.

“It’s so intense and so amazing. … I knew that my child literally said, ‘I forgive you. I love you. And I’m waiting to see you again,’” she said. “That was the most beautiful part.”

“It was at that very moment of realizing that when they said that my child forgave me, I knew that I had to truly forgive myself. Because I felt that God’s grace and forgiveness was shown through that meditation of my child forgiving me and allowing myself to come to terms with and not hold the guilt and shame of what I did anymore,” she continued. “(I thought,) ‘I forgive myself. Now it’s time to step forward and do what God wants of me, I have to help others to not make this decision anymore.’”

Dave and Anne were so deeply impacted by the healing they received at Rachel’s Vineyard that they became facilitators themselves.

While Rachel’s Vineyard is associated with the Catholic Church, its retreats are nondenominational.

“It’s like going through the crucifixion to the burial and the resurrection. It’s a work of the Holy Spirit, how everything unfolds,” Anne said. “It truly is challenging, but yet, you take it in steps, and then, you meet Christ along the way.”