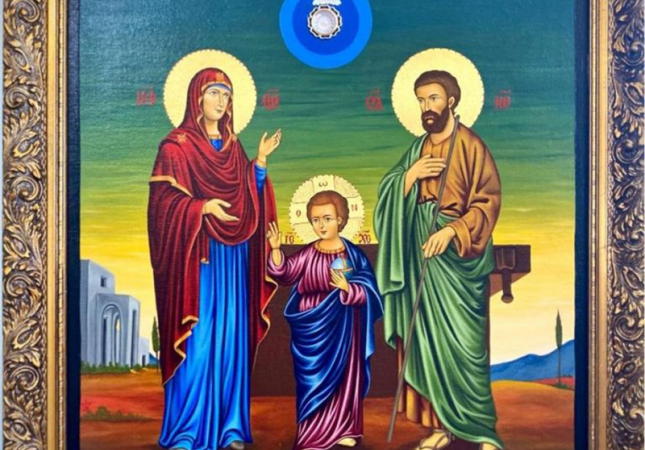 The icon of the Holy Family of Divine Will of Unity and Peace is being taken around Lebanon and will be taken to Syria, Iraq, Egypt and Jordan. The icon Family is inlaid with relics from the Basilica of the Annunciation in Nazareth, Israel. (CNS photo/Episcopal Committee of Justice and Peace of the Council of Catholic Patriarchs of the Middle East)

BEIRUT (CNS) — The pilgrimage of the icon of the Holy Family of Divine Will of Unity and Peace has begun. The icon, written by Melkite Father Samir Rouhana of St. Elias Parish near Haifa, Israel, will be in Lebanon for a month.

The icon of the Holy Family is inlaid with relics from the Basilica of the Annunciation in Nazareth, Israel. It was blessed and consecrated there by Archbishop Pierbattista Pizzaballa, Latin patriarch of Jerusalem, June 27, the day in which the Middle East was consecrated to the Holy Family. Simultaneously June 27, patriarchs and bishops in the Middle East also celebrated Mass for peace in what will be an annual tradition on the last Sunday in June.

Noting that Lebanon “is going through the most dangerous stages today,” Patriarch Younan stressed that “more than ever before, it needs the blessings of the Holy Family. … “We resort to the Holy Family and place under their feet our pain, anxiety, weakness and hopes.”

He prayed that “we learn from this icon to live in Lebanon our call to holiness … and work so that our country remains a torch in the region and an example of coexistence.”

The icon will be on the altar at the Aug. 4 memorial Mass commemorating the one-year anniversary of the Beirut blast, at the site of the port catastrophe. More than 200 people were killed, more than 6,000 injured and more than 300,000 displaced in the chemical explosion.

In his homily at the Syriac cathedral, Patriarch Younan lamented that Lebanon has become “a laughingstock to the world, because of the financial and living disaster that has befallen us.”

He added that “the officials in this country were not up to the level of responsibility.”

Patriarch Younan called upon the Holy Family “in these difficult days to accompany us, support us, intercede for us, our families, our society and our homeland, and rescue it from the state of collapse.”

Lebanon is in the throes of an unprecedented socioeconomic crisis, in which the national currency has lost more than 90% of its value since late 2019, plunging more than 50% of the country’s population into poverty. The World Bank has deemed Lebanon’s dire situation as one of the deepest depressions since the mid-19th century.