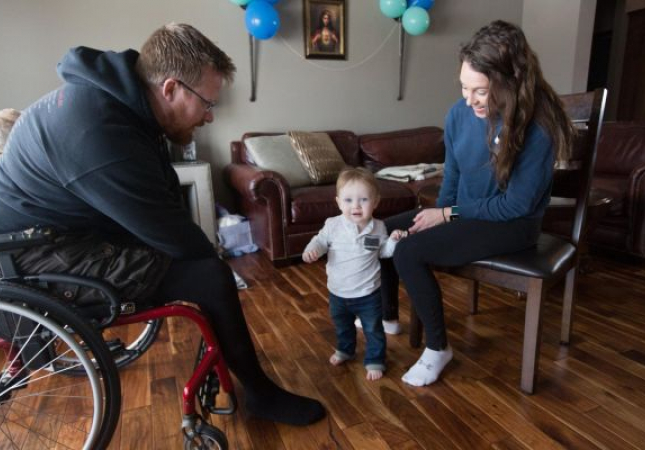 Colin and Julia Faust of Mound, Minn., play with their son, Leo, in their home Oct. 26, 2020. (CNS photo/Dave Hrbacek, The Catholic Spirit)

MOUND, Minn. (CNS) — Colin Faust wasn’t even Catholic when he was wearing the Miraculous Medal that he now believes helped save his life.

He was a 21-year-old Marine serving in Afghanistan in 2010, stationed in the most dangerous combat zone in the country.

On top of that, Faust had one of the most hazardous assignments: forward scout observer, helping clear and secure once occupied by the enemy, walking on terrain riddled with improvised explosive devices, or IEDs.

Faust stepped on an IED the morning of Oct. 15. Walking a few feet behind a combat engineer, who was using a minesweeper to detect IEDs, Faust’s left foot caught a mine that was missed.

The explosion catapulted him upward. He recalled looking down at the ground while feeling suspended in midair. His rifle landed 100 yards away.

“I remember being extremely confused … not knowing what just happened,” said Faust, now 31. “And, my first reaction, my instinct, for whatever reason, was to say a prayer. I don’t even remember what I said.”

But he definitely remembers what he wore: a Miraculous Medal he had received from his Catholic grandmother that once belonged to her brother, a priest. Faust hadn’t given it much thought before the accident, but he now reveres the piece of sacred jewelry, which he sees as a sign that God saved his life.

The medal was the only thing he was wearing that day that survived the blast. He wore it daily for seven more years before placing it in storage to preserve it for future generations.

Joshua wanted to thank God for keeping him safe during his combat tour in Afghanistan. Although he was not Catholic, he found a nearby Catholic Church...

As Faust looks back on the traumatic incident, he sees so many reasons his life could have — and perhaps should have — ended that day.

First, he easily could have bled to death had it not been for quick medical attention from a Navy corpsman, who quickly applied tourniquets to both legs and his left arm.

Second, the medevac helicopter that was deployed to airlift him from the area was called off because of heavy enemy artillery surrounding Faust’s position. He believes Taliban fighters returned after seeing the explosion, hoping to take out the helicopter they expected would come.

Third, a medic tried to give him a shot of morphine to kill his pain, but ditched the effort when the syringe failed. Faust later learned the shot would have killed him because of the amount of blood he had lost.

The final danger came when a group of soldiers placed him on a tarp and ran toward a safe position while under fire. Faust later learned they managed to avoid triggering 50 other IEDs in the field.

The medal has served as a concrete reminder that God and Mary were looking out for him.

Faust, who described the Lutheran faith of his upbringing in Waconia, Minnesota, as “lukewarm,” years later turned to God who had protected him in battle. His deepened faith led Faust to join the Catholic Church during the Easter Vigil at St. Victoria Church in Victoria, Minnesota, March 31, 2018, his 29th birthday.

He already had made a connection to the church by marriage to his wife, Julia, a lifelong Catholic. The couple met in 2013 when Julia’s mother and his, who were friends, planned a family dinner to connect them, hoping they would date.

It worked. By that time, Colin had gone through numerous surgeries and more than two years of rehabilitation. The bottom of his left leg was lost in the blast and his right leg was severely damaged; his left arm was seriously injured.

What was fully intact, however, was a quiet strength and positive attitude that drew Julia to him.

They were married Oct. 15, 2016, the anniversary date of his accident. Now members of Our Lady of the Lake Parish in Mound, they have a 13-month-old son, Leo.

As much as Faust loves being a husband and father, his primary passion is his faith. He is pursuing a master’s degree in theology from the St. Paul Seminary School of Divinity.

Three years ago, Faust experienced what he calls an “explosion of grace.” He credits Mary for the feeling, which he ties to wearing the Miraculous Medal on the battlefield. The medal, also known as the Medal of Our Lady of Grace, originates from St. Catherine Laboure in France following her Marian apparitions in 1830.

Faust was sitting in bed late one night, waiting for Julia to return home from work. In the quiet, he was convicted that he no longer could be lukewarm about his faith. Christ “needed to be the center of my life,” he told The Catholic Spirit, newspaper of the Archdiocese of St. Paul and Minneapolis.

He soon started came across material about the life of St. Padre Pio, an Italian Capuchin Franciscan priest with the stigmata who died at 81 in 1968. The saint’s example of holiness and sanctity convinced Faust to become Catholic.

Marian devotion is one part of his faith. He prays the rosary daily and has consecrated himself to the Immaculate Heart of Mary. And Faust’s lifestyle connects to one of his favorite Scripture verses, Matthew 16:24: “If any man would come after me, let him deny himself, take up his cross and follow me.”

Faust certainly has carried a cross in the suffering of years of surgery and rehabilitation, and having to spend the rest of his life in a wheelchair. But the way he talks about it now indicates he has pushed self-pity out of his life. It has been replaced by a deep wisdom for which he has paid a heavy price.

“A joyous peace reigns through the soul when one realizes that all the pain, suffering and moments of trial in this life are not meaningless, but rather they become the means of your own and others’ sanctification when united to Christ as part of his mystical body,” he wrote.

“Thus, when ordered to our proper end, they do have meaning, they do have a purpose, and as one progresses in the interior life, one learns that they are to be cherished. They conform us to Christ, they provide opportunity to demonstrate our love, destroy our ego and lean on God in our vulnerability. How contrary this is to the wisdom of the world.”

Hrbacek is a staff writer for The Catholic Spirit, newspaper of the Archdiocese of St. Paul and Minneapolis.