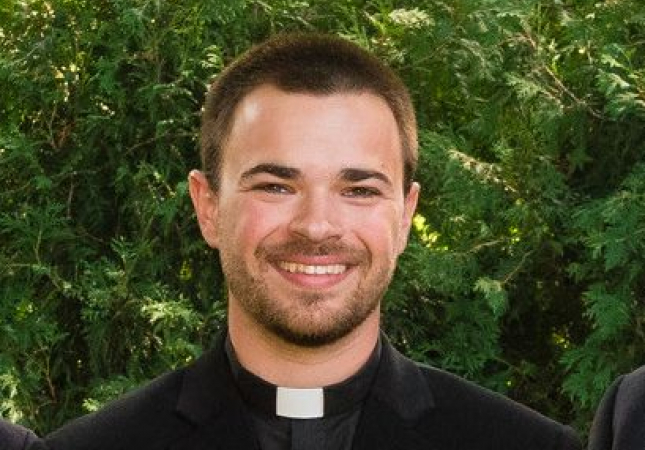 WHAT: Seminarian Kevin Wojciechowski will be Ordained a Transitional Deacon

WHERE: Via livestream- details below.

ONLINE: Watch on our website, our YouTube page or our Facebook page. You can also watch on any Smart T.V. by searching for our YouTube page on your Smart TV or streaming device such as Roku, Amazon Fire Stick, Chromecast, AppleTV, or other device.

The story below was originally published in Faith Saginaw Magazine in 2018.

A cradle Catholic, Kevin began questioning the Faith in about tenth grade.

“It led to a lot of skepticism about belief in God’s existence and why I should be Catholic when I could be anything else,” he said.

Thankfully, he was able to find answers through books and the positive examples of faithful Catholics. By the time he began
attending Saginaw Valley State University, he was ready to dive deeper in his faith through campus ministry.

“I was really inspired by the priests at SVSU and their witness,” he said. “I began to learn about the priesthood, that they do more than just celebrate Mass on Sunday. The more that I began to understand who the priest is, the more I felt myself attracted to it.”

He began to consider the possibility of seminary instead of becoming a math teacher or counselor.

“Neither of those career paths seemed to satisfy the desires of my heart,” he said. “What I saw in the priesthood was something more, and that mystery of the something more attracted me. I see the unique way a priest is able to bring Christ to people and bring people to Christ.”

He applied for seminary, deciding to study for the Diocese of Saginaw, which he had come to know through his discernment process.

“I think I caught my family off-guard because I had never really acknowledged I was thinking about this. They probably had just as many questions as I did going into it. But throughout the process, we’ve been able to learn together, and they’ve been very supportive,” he said.

“I entered seminary, still unsure if this was really God’s path for me,” he said. “Taking the classes and having that daily prayer life started to confirm this call and deepen it all the more.”

Being a Seminarian During Difficult Times

Whenever he finds himself getting overwhelmed, Kevin finds comfort in Psalm 131, a brief song of trust in the Lord.

Kevin also acknowledges the temptation to see tragic headlines and feel like he has a massive task ahead of him, but he is learning to approach these with humble trust in God.

“I am not going to be the savior in this situation,” he said. “Jesus Christ has been, is and always will be. I place it all at His feet. I trust these situations in our Church and in our world to Him.”

“I’ve always liked the Scripture passage where Jesus reads from Isaiah that He has come to bring glad tidings to the poor,” Kevin said, referencing Luke 4:18. “I have received such healing and truth from the Lord. I see a broken world, and I want to be able to bring to others what I myself have experienced in Christ, whether that’s through the sacraments, spiritual direction or simply having a meal with a family.”

“Whenever I talk to people about this discernment process, the No. 1 fear I always hear is the uncertainty. A lot of people will ask, ‘What if this isn’t what God’s calling me to?’” Kevin said. “If you enter the seminary because you have even the smallest inkling that God may be calling you to the priesthood and you open yourself up to the formation you receive in the seminary, you have nothing to lose.”

Kevin added that he knows several young men who entered wondering if God was really calling them to the priesthood and discerned out of seminary.

“They came out of seminary a better man for it,” he said. “Don’t let the fear of uncertainty paralyze you.”

He also encourages everyone discerning any vocation, but especially the priesthood and religious life, to have an intimate prayer life with Jesus.

“At the heart of any major decision is falling in love,” he said. “We fall in love with a person, not an idea or a project. Nobody gives their life over for an idea, but we are willing to die for a person.(Knowing Jesus) makes it worth any sacrifice it may entail, and that’s going to be the source of all joy along the way as well.”

Is God calling you or someone you know to the priesthood?