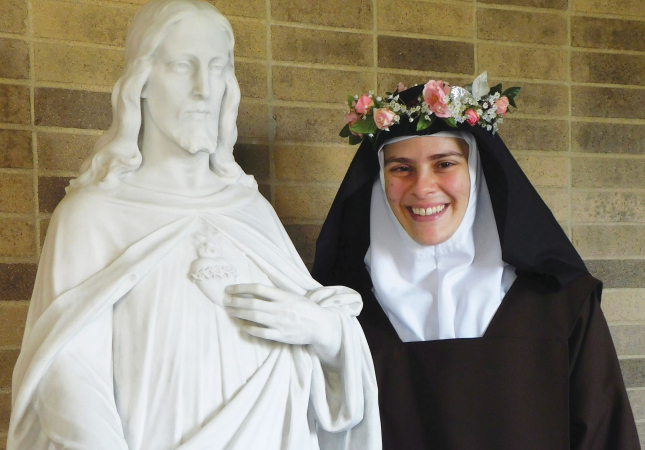 Christina Krotzer of Midland was looking for a visible sign. She spent years discerning a call to religious life and now believed God wanted her to become a cloistered Carmelite nun. But she wanted to be certain.

She prayed a 30-day novena to St. Joseph and on the final day, she got a visible sign. She drove past a billboard encouraging people to visit a west Michigan community. It read: Give it a whirl! - St. Joseph “I said, ‘Lord, you’ve got to be kidding,’” she laughed. With humor, God had further confirmed she was called to religious life.

On Oct. 22, 2012, at age 26, Christina entered Carmel. The following year, she was clothed with the Carmelite habit and received the name Sister Rose Marie of the Sacred Heart, and she professed her solemn vows on June 23, 2018.

Sister Rose Marie began discernment after high school, but she didn’t find a community where she believed she belonged. When her sister, Sheri (Krotzer) Satterstrom joined St. Mary’s University Parish at Central Michigan University under the pastorage of Father Will Prospero, SJ, Sister Rose Marie got involved in their campus ministry.

“It was by attending there that I really got involved more in my faith. It drew me in, in a way that I had not been before, into the Catholic faith,” Sister Rose Marie said.

“For me, (Pope Benedict XVI’s homily) was a really life-changing moment because … he had said something along the lines of … ‘don’t be afraid to follow your vocation to the priesthood or religious life.’ I just remember sitting there and breaking down and actually crying, because I knew that was what God wanted me to do and I still was not looking at that point,” she recalled. “Because of his homily, I started looking again.”

Towards the end of discernment, Sister Rose Marie attended a retreat hosted by an active Carmelite order.

“When I went on that retreat, I really got a big grace from God. It was there I felt the Lord saying ‘You will be a Carmelite; this is what I’m calling you to. This is the charism I want you to follow. This is what’s in you— the charism you already have growing,” she said, adding that a charism is a spiritual gift. “Just hearing the Carmelites there talk about what Carmel was, what the spirituality of Carmel was, I knew it was something that fit for me.”

Sister Rose Marie visited the community’s California motherhouse, where they ran retreats and worked in education, healthcare and other professions. However, she was drawn to a contemplative, cloistered order. She decided to visit the Carmel where she now lives because she had visited it on one of Father Will’s “nun runs.” Over the next year, she visited several times.

“I just tried to seek God’s will through it all,” she said, adding that prayer, Eucharistic Adoration, spiritual direction, experiences on her pilgrimages and at her parishes and others’ examples all contributed to her vocation.

Separated, But United In Christ

Sheri’s voice broke as she described her sister’s entrance to Carmel.

“I gave her my last hug. I think that was when it really hit me,” she said. “I think the physical touch part of it is probably the hardest part for me. It’s 100 percent worth it, but it’s a cross.”

Their mother, Carolyn Krotzer, a member of Our Lady of Grace Parish in Sanford, also describes the deep sense of loss. Although she talks with her daughter on the phone and writes letters, during family visits — usually twice a year, though four visits are permitted — they talk through the grate. The grate is a type of screen separating visitors in the parlor, symbolizing the importance of their enclosure. Sister Rose Marie said the orders who are cloistered maintain enclosure in order to live a life of deep contemplative prayer, searching for God alone. As brides of Christ, the sisters remain intimately united to their Divine Spouse.

Although the physical separation is difficult for the Krotzers, they said they understand its purpose.

“They’re not isolated; it’s that they’re separated to do what they do,” Carolyn said.

“I think prayer is one of the most intimate things you can experience with any other person, so when you’re praying for each other it brings you so much closer than you could ever be without it,” Sheri said.

Each day, she offers a Rosary and a Divine Mercy Chaplet for her sister, and she knows that Sister Rose Marie is praying for her as well.

For Carolyn, attending Mass gives her a special feeling of closeness.

“I think I’ve become closer to God and understand more what the Eucharist is about, because Christina (Sister Rose Marie) has shown me how much the Eucharist means in the Catholic faith. She’ll say, ‘Yeah, Mom, I’ll see you at Mass because I’m sharing the Eucharist with you!’” she said.

Carolyn sees what she believes are other fruits of her daughter’s prayers as well. For example, after 35 years without attending church, her husband returned. After Sunday Mass, Carolyn attends his church with him.

“It can be hard at times, but it’s very, very rewarding,” Carolyn said.

In the end, Carolyn knows it’s about something bigger.

“I’ve always told myself I want my kids to be happy,” she said. “The only way to be happy is to follow God’s plan for you.”

To her family, Sister Rose Marie’s joy is evident.

At her solemn profession, Sister Rose Marie said she felt the happiness her mother desired for her in a profound way as she lay prostrate during the Litany of Saints, pronounced her vows, received the black veil of a perpetually professed Carmelite and was given a crown of flowers.

“I think more than anything what came for me was a great sense of gratitude and being so ... unworthy of such a vocation, just knowing how much a gift it is,” Sister Rose Marie said, struggling for the right words. “And just how much love God has for each of us, individually. It’s something that’s very powerful. And to want others to know that. There are many things. If you want to try and sum it up, for sure gratitude was a big one. Joy … and peace.”