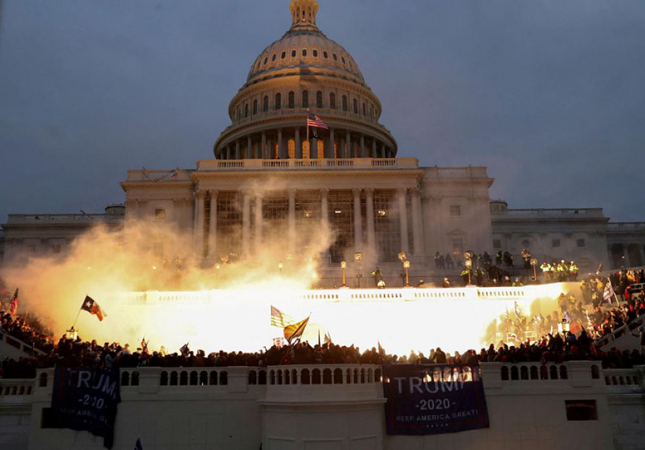 An explosion caused by a police munition is seen while supporters of U.S. President Donald Trump gather in front of the U.S. Capitol Building in Washington in this Jan. 6, 2021, file photo. A year after the assault on the Capitol, the Vatican newspaper says it was "a direct blow to the heart of American democracy." (CNS photo/Leah Millis, Reuters)

VATICAN CITY (CNS) — The attack on the U.S. Capitol Jan. 6, 2021, “represented a direct blow to the heart of American democracy,” the Vatican newspaper said.

Marking the first anniversary of the storming of the Capitol, the newspaper, L’Osservatore Romano, explained to readers, “The attack on the Capitol was the degenerated development of the ‘Save America March,’ organized by supporters of outgoing President Donald Trump to contest the election that had decreed his defeat.”

In its Page 4 article, the newspaper noted that it took three hours to secure the building after the siege began and that, when it was over, four protesters were dead, 13 were wounded and a police officer died a few days later in hospital from his injuries.

While several thousand people had attended the pro-Trump rally, the Vatican newspaper said those who laid siege to the Capitol were just a portion of the crowd, many of whom wore “far-right and white supremacist emblems.”

The insurrection, which aimed to stop Congress from certifying the valid election of President Joe Biden, “represented a direct blow to the heart of American democracy, risking raising questions about its functioning and fame,” the newspaper said. “Moreover, the event showed the aggressive potential of internal extremist organizations such as ‘QAnon,’ the ‘Proud Boys’ and the ‘Boogaloo Bois,’ which until then had never been considered terrorist groups.”