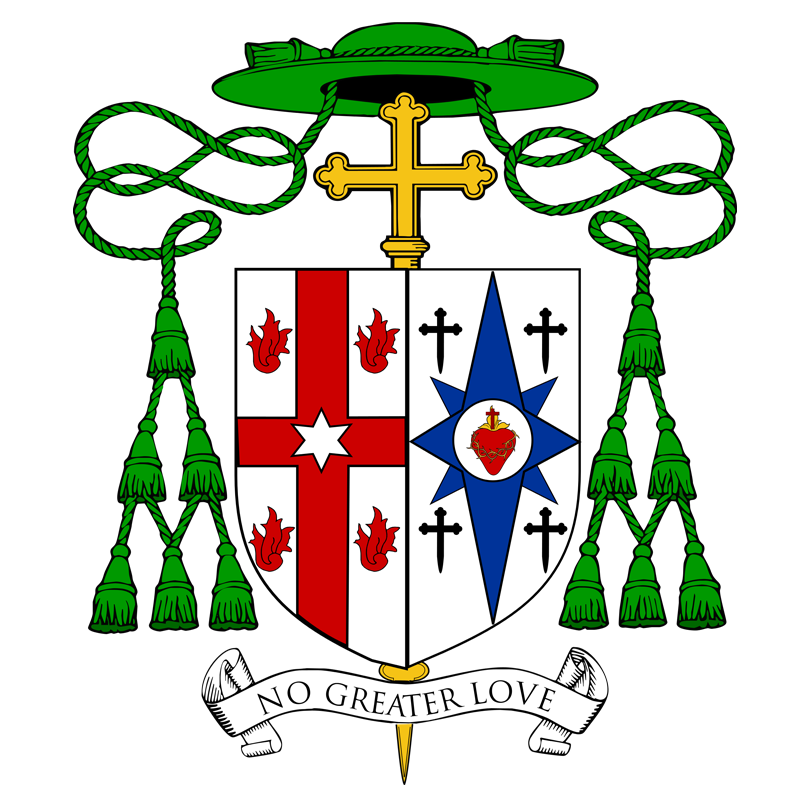 In designing the shield — the central element in what is formally called the heraldic achievement — a bishop has an opportunity to depict symbolically various aspects of his own life and heritage, and to highlight particular aspects of Catholic faith and devotion that are important to him.  Every coat of arms also includes external elements that identify the rank of the bearer.    The formal description of a coat of arms, known as the blazon, uses a technical language, derived from medieval French and English terms, which allows the appearance and position of each element in the achievement to be recorded precisely.

A diocesan bishop shows his commitment to the flock he shepherds by combining his personal coat of arms with that of the diocese, in a technique known as impaling.  The shield is divided in half along the pale or central vertical line.  The arms of the diocese appear on the dexter side — that is, on the side of the shield to the viewer’s left, which would cover the right side (in Latin, dextera) of the person carrying the shield.  The arms of the bishop are on the sinister side — the bearer’s left, the viewer’s right.

The most prominent feature of the arms of the Diocese of Saginaw is a cross, the central symbol of the Christian faith, painted red (gules).  The cross is charged with a six-pointed star, which stands for the Blessed Virgin Mary and the mystery of her Assumption.  The cathedral of the diocese is dedicated to Our Lady under the title of this mystery.  Surrounding the cross are four flames, which symbolize the Descent of the Holy Spirit, who on Pentecost appeared to the apostles gathered in the Upper Room as tongues of fire.  The flames also allude to the Sauk people, the Native American nation after whom the city and Saginaw Bay were named.  Early French settlers in the region referred to the Sauk as gens de feu, that is, “people of fire.”

The arms of Bishop Gruss are dominated by a cross estoile, a star-shaped cross that also resembles a compass rose.  It alludes both to his former occupation as a commercial pilot, as well as to his responsibility as a priest and bishop to lead the people entrusted to his care along the straight and narrow Way that leads to eternal life (cf. Matthew 7:14).  The inner arms of the compass point to four small crosses, for anyone who would follow this Way must accept the Cross of Christ, who commands his disciples to “take up their cross daily and follow me.” (Luke 9:23).

The particular shape of these crosses, and the fact that they are painted black (sable) on a silver (argent) background, recall the coat of arms of the Diocese of Davenport, where Bishop Gruss spent 30 years of his life and served as a priest for 17 years.  On a silver disc at the center of the compass is a depiction of the Sacred Heart of Jesus.  Bishop Gruss served as Rector of Sacred Heart Cathedral in Davenport from July 2010 until his appointment as Bishop of Rapid City in 2011.

The compass is painted blue (azure) to allude to Our Lady, whose vocation, like that of the Bishop, is to point the way to the heart of her Son.  Thus the Sacred Heart—such a precious symbol of Our Lord’s human nature—is placed within the compass, as it first grew within the womb of the Virgin Mary.  The white disc (plate) behind it recalls the sacred Host, and makes the cross estoile resemble not only a compass but also a monstrance, recalling the centrality of the Eucharist in the life of the priest and the life of the Church.

This mystery of the Lord’s sacred humanity and of his infinite love, “even unto death” (Philippians 2:8), is central not only to the Bishop’s coat of arms, but to his identity and ministry as a priest and a Bishop.  The responsibility to love and to sacrifice in imitation of Jesus Christ is further recalled in the motto inscribed on the scroll below the shield.  The phrase is taken from the words of the Lord to his apostles at the Last Supper: “There is no greater love than to lay down one's life for one's friends” (John 15:13).

The shield is ensigned with external elements that identify the bearer as a Bishop.  A gold processional cross appears behind the shield.  The galero or “pilgrim’s hat” is used heraldically in various colors and with specific numbers of tassels to indicate the rank of a bearer of a coat of arms.  A bishop uses a green galero with three rows of green tassels.