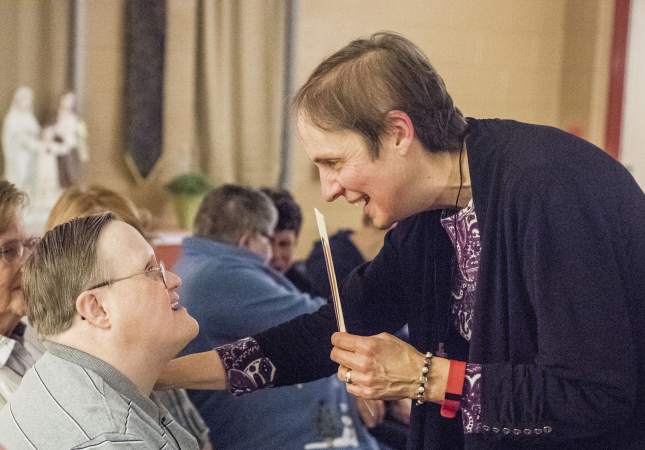 David Davis looks at a picture of Jesus as Maribeth Hopps blesses him.

David Davis looks at a picture of Jesus as Maribeth Hopps blesses him.

Bringing Catholics of all Abilities into Prayer Community

John and Kim Ward, parishioners at Corpus Christi in Bay City, describe Praying Our Faith as “somewhere Taylor can be Taylor.” Their daughter Taylor Ward, 17, is an affectionate teenager with a mischievous grin. She also has autism and communicates mainly through sign language with her parents. One gesture she repeats frequently in the gathering space is “pray.”

A Ministry for and With Adults and Teens with Developmental Disabilities

Praying Our Faith (POF) is a ministry for and with adults and teens with developmental disabilities. The two age groups meet on alternating Wednesday evenings in the Our Lady of Czestochowa Faith Formation Center. Participants and their companions do simple activities to quiet their minds and share news about their lives before moving into the prayer room. They end the evening with a snack, fellowship and laughter. Surprisingly, this program began with a research paper.

When Maribeth Hopps, a parishioner at All Saints Parish in Bay City, was assigned a paper on “Christ in the World Today” for a Christology class seven years ago, she never could have imagined how it would change her life. Unsure of a topic, Maribeth approached the instructor, who suggested looking up L’Arche.

L’Arche (pronounced “larsh”) communities were founded in the 1960s by Jean Vanier, a French Catholic who invited those with developmental disabilities to live with him, giving them a home life they would not have found in an institution.

“It was a drawing of my heart and a call,”

Maribeth explained. “That was a surprise. I wasn’t expecting what I got out of that when I was researching the assignment.”

Maribeth read about his experiences and was deeply moved. For years, she prayed, read books and discussed the matter with a spiritual director, trying to discern what God was calling her to do.

“I didn’t know where to go. It just kind of rambled around in my head and my heart for a couple of years,” she said. “Then I found out there was a SPRED program in Saginaw.”

SPRED, or Special Religious Development, is a faith formation program for those with disabilities in several communities throughout the Diocese of Saginaw. Maribeth became a catechist with the program and credits leader Sister Elaine Raymond, MSSp, with “giving a voice to everything that had been spinning around” in her head and heart.

Although she enjoyed working with SPRED in Saginaw, Maribeth knew there was no ministry for those with developmental disabilities in her own community of Bay City. Meanwhile, she participated in an online pilot program through the University of Dayton, earning a certificate in disability ministry.

At the end of the course, she was assigned to organize a prayer service based on McGuire Memorial Awakening Spiritual Dimensions: Prayer Services with Persons with Severe Disabilities by William Gillum, OFMCap. The friends who participated in her assignment loved it.

A light bulb went on.

“‘Praying Our Faith’ just kind of popped into my head,” Maribeth said, explaining that it was not a class.

“It’s an experience of prayer connected to our daily life.”

Praying Our Faith was born and began meeting in February 2016.

Working together with parishes, priests and directors of religious education in surrounding parishes, Maribeth drew from her experiences as a campus minister and catechist, as well as various courses, to establish POF.

Father José Cabrera, pastor of All Saints Parish, recalls Maribeth bringing the idea to him. “She is a perfect example of a person who loves the Church and serves the Church in many ways,” he said. “But her heart is with people with disabilities.”

Father José attends often, but is quick to point out that he is not the chaplain; the program belongs to the entire vicariate. The program began at All Saints Parish, St. James Church, but later moved to its current location.

“The start was rough, as our St. James site didn’t have the space to accommodate people with disabilities. Nonetheless, we began the journey, though small,” he said. “It is beautiful now.”

POF is intended to supplement what the participants are doing in their parishes, such as attending Mass. Maribeth said they also try to find everyone’s gifts so they can possibly become active in their own parishes.

One day, Maribeth was sitting with POF participant Allison Baker during Mass at All Saints Parish when Allison asked about the lectors reading Scripture.

“She said, ‘I want to do that. I want my voice to be heard,’” recalled Maribeth. “And I’ve never forgotten that. Allison reads at (POF Masses) now.”

“It’s a gift of God to be in this Group and Talk about Jesus,”

Allison said. “I feel it’s important to know about Jesus … when I’m here, I feel right.”

Allison said she also enjoys the celebration time after each prayer session, during which the participants enjoy a snack and fellowship.

“We could learn a lot from them about evangelization and preaching the Gospel,”

Maribeth said of the participants. For example, Steve Elisech of Bay City is well-known as a prayer warrior; he takes prayer requests from everyone he encounters, including during walks to the neighborhood 7-11.

A quotation from L’Arche founder Jean Vanier graces the front of the POF brochure: “To love someone is to reveal to them their capacities for life, the light that is shining in them.”

This, Maribeth says, is what they strive to do for each other.

“(POF participants) minister to all of us,” said Maribeth. “Their love for God is so deep. Their trust and their hope — we all have that, but they’re not afraid to show it, but sometimes we are. We learn so much from our friends.”

“Belonging” is an important concept: all contribute to the prayer service in some way and participate in their Masses, too.

The prayer service begins with participants quietly entering the space while soft music and low lighting create a calm, sacred atmosphere. Once they are seated, Maribeth calls each person by name and tells them individually, “It’s good you’re here.” Passing a bowl of holy water, each person blesses themselves with the Sign of the Cross.

On this day, the adult group’s topic is Baptism of the Lord. Maribeth holds up pictures of different road signs, explaining that they mean specific things. Then she holds up signs of Baptism – water, a candle, a white garment – and shares what they represent, passing around each picture. Next, companion Margaret Dinnan of Saginaw brings a Bible to each person, allowing them to reverence it, as Maribeth leads a song, praying that their hearts will be open to the word of God. She reads a brief passage twice, allowing the words to sink in, and speaks briefly about the Sacrament of Baptism.

The members also pray for each other, passing around a crucifix and sharing their prayer intentions, from family members’ health to people affected by tragic events around the world. At the end, they pray the Lord’s Prayer. Maribeth then plays a song, “Take Me to the Water”; gradually, everyone joins in for a truly beautiful moment of community.

To conclude, Maribeth uses a specific drawing of Jesus recommended by Awakening Spiritual Dimensions and, holding it in front of each individual, she calls them by name and says, as Jesus,

“To have them look at me and say ‘I love Jesus’ and they’re ... looking at the picture of Jesus and you know they mean it, and you can feel it. It’s an honor, a privilege to pray with and be with them,” Maribeth said passionately. “I have a hard time putting that experience of God into words.”

In addition to the prayer services, POF also meets periodically for FaithWorks, in which they make beaded finger rosaries and chaplets to give away. They also take small trips together, enjoying area museums or bowling. On the Saturday nearest Dec. 3, the United Nations International Day of Persons with Disabilities, they celebrate Mass together at All Saints Parish. They participate in the procession, lectoring, bringing Advent candles and prayer cards after Mass.

One of the best moments John Ward, Taylor’s father, could recall was during one such Mass: celebrant Father Steve Fillion told the congregation that they had some special visitors.

That extra level of welcome helped their family as well as others, since sometimes individuals with autism will express loud vocalizations.

Gabby Velasquez of All Saints Parish has been a companion with the POF teens for almost two years and says the experience has been eye-opening, making her much more aware of the struggles the families face, but also deepening her conviction to act with compassion, not judgement.

“They’ve taught me so much,”

she said of the teens. “It’s been a learning experience with teens who learn, worship and communicate differently than I’m used to.”

One of the most impactful parts of POF for Gabby has been intercessory prayer. She explained that while in college she often prayed for her own needs. At POF, however, the teens always pray for other people instead of themselves.

“It’s a reminder to be a little less selfish in our prayers,” she said, adding that she has learned to “get back to basics: be thankful and pray for others to bring you closer to God and each other.”

While Gabby believes POF is best experienced firsthand, she insists that you don’t need to start a group or have meetings to build inclusiveness.

“You can invite people of all walks of life and all abilities to experience life with you. I think the whole message of our group is something people can bring into their homes,” she said.

“I like that this is one of the few things we can do as a family,” John Ward said. With four children, he and his wife Kim often split up who is with each child during various activities. Sometimes Taylor’s younger brother also comes to POF.

“For Taylor, this is the exposure of faith she gets outside the home,” said Kim. “These kids are like sponges. (They) are amazing.”

“It’s been good for us to have consistency,” Cassie said, adding that Brentan’s social skills have also improved. He enjoys helping stack chairs and clean tables at the end of each evening.

“He understands things, but he can’t express them,” she said. By slowing down the service, he is able to learn more about the Catholic faith, she said.

Other alterations, like praying the Lord’s Prayer in sign language, help Brentan and Taylor join the group. The companions try to accommodate any special needs participants might have, including wheelchair accessibility.

“The body of Christ is not complete unless everyone is there,”

“When we’re at Mass and we’re praising and worshipping or we’re in prayer, it’s like – I don’t even know how to explain it – it’s so much joy and so much connection with God and with each other that you can almost feel the electricity,” Maribeth said. “We love them and they love us back. We see Jesus in them and we hope to God they see Jesus in us. That’s how we learn about our faith through each other.”

Learn about or Get Involved with Special Needs Ministries 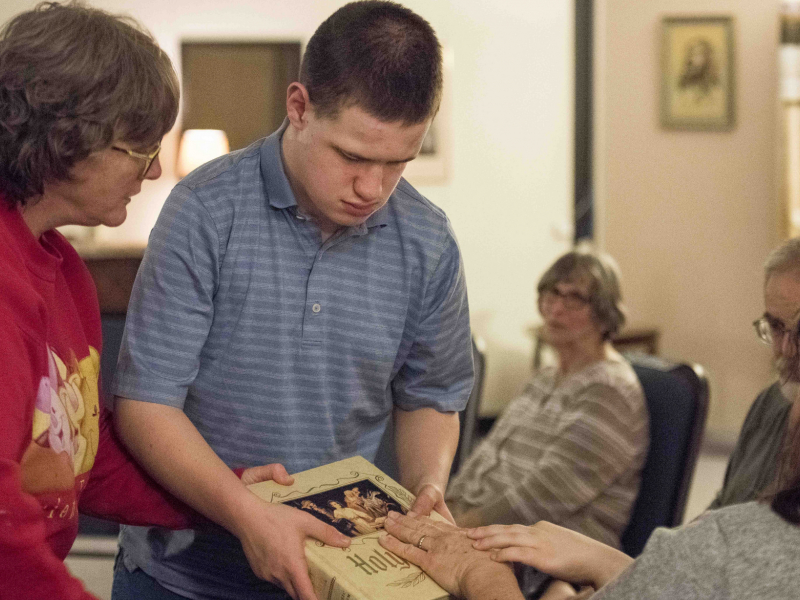 Brentan Hale and his mother Cassie Hale bring a Bible to each person for the opportunity to reverence the Scripture during Praying Our Faith. 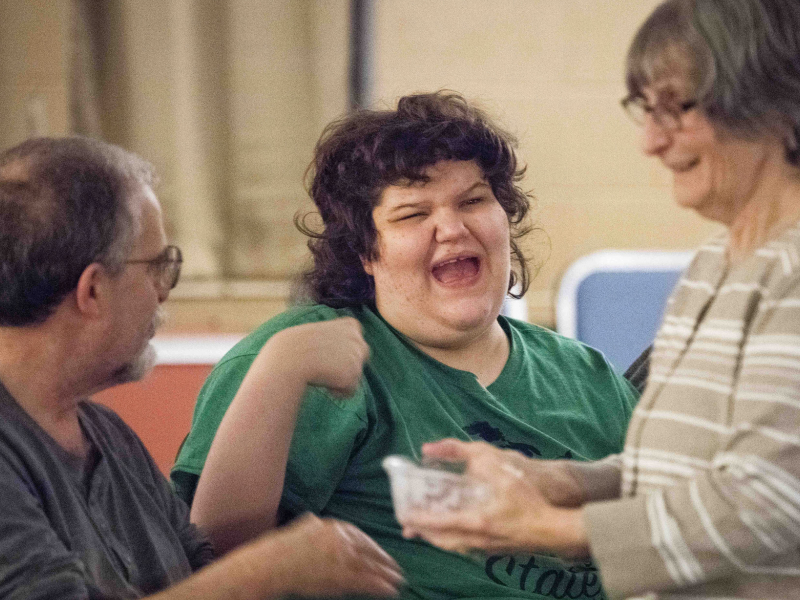 Taylor Ward grins as she makes the Sign of the Cross with holy water as her father, John Ward, watches and POF companion Joyce Hale brings the holy water to each person.