Many people struggle to understand why the Catholic Church does not ordain women to the priesthood. We live in an era when much progress has been made regarding the praiseworthy goal of equal rights for women. In the Church’s view, though, no human being – whether male or female – has a “right” to be ordained:

"No one has a right to receive the sacrament of Holy Orders. Indeed no one claims this office for himself; he is called to it by God. Anyone who thinks he recognizes the signs of God's call to the ordained ministry must humbly submit his desire to the authority of the Church, who has the responsibility and right to call someone to receive orders. Like every grace, this sacrament can be received only as an unmerited gift (Catechism of the Catholic Church 1578)."

In 2015, Pope Francis stated: “I am convinced that it is urgent to offer places to women in the life of the Church and to welcome them … Therefore, a more widespread and incisive presence of women in communities is desirable, in order that we may see many women involved in pastoral responsibilities, in the accompaniment of people, families and groups, as well as in theological reflection.” Pope Francis went on to emphasize that the “irreplaceable role of the woman in the family cannot be forgotten. The qualities of delicacy, particular sensitivity and tenderness, which enrich the feminine soul, represent not only a genuine strength for the life of the family, to illuminate a climate of serenity and harmony, but also a reality without which the human vocation would be unattainable.” However, on another occasion, Pope Francis worried that those who focus on the topic of ordaining women priests may suffer from clericalism, which is an exaggerated esteem for the priestly collar: "Women in the Church must be valued, not clericalized.”

In obedience to the Lord, the Catholic Church believes it does not have the authority to begin admitting women to the priesthood. This was the definitive teaching of Pope St. John Paul II in 1994: “Wherefore, in order that all doubt may be removed regarding a matter of great importance, a matter which pertains to the Church's divine constitution itself, in virtue of my ministry of confirming the brethren (cf. Lk 22:32), I declare that the Church has no authority whatsoever to confer priestly ordination on women and that this judgment is to be definitively held by all the Church's faithful” (Ordinatio Sacerdotalis).

“Only a baptized man (vir) validly receives sacred ordination.” The Lord Jesus chose men (viri) to form the college of the twelve apostles, and the apostles did the same when they chose collaborators to succeed them in their ministry. The college of bishops, with whom the priests are united in the priesthood, makes the college of the twelve an ever-present and ever-active reality until Christ's return. The Church recognizes herself to be bound by this choice made by the Lord himself. For this reason the ordination of women is not possible. (Catechism of the Catholic Church 1577)

Why not women priests? 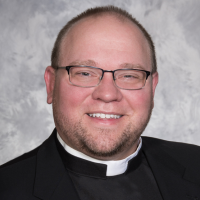