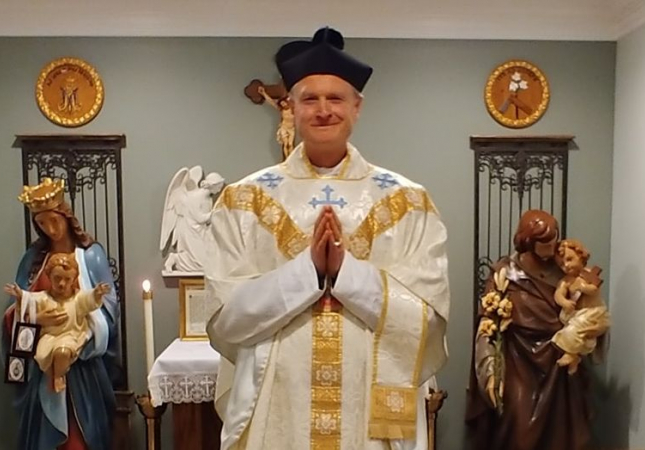 On Sunday, Dec. 13 at 3 p.m., the Extraordinary Form of the Roman Rite (Latin Mass) will be celebrated at Holy Family Church in Saginaw. Father Christopher Coman will celebrate the Mass and Bishop Robert Gruss will preach the homily.

“I hope this will be welcome news to the faithful of our diocese who are nourished by the Extraordinary Form of the Mass,” Bishop Gruss said.

The more traditional celebration of the liturgy does not reverse challenges and opportunities made possible by the Second Vatican Council, traditional practices can enrich our liturgies.

“Many worshippers, including me and my family, are drawn to this beautiful liturgical preference,” said Joey Storer, president of the Saginaw Latin Mass Association, an organization dedicated to promoting and sustaining the Extraordinary Form of the Roman Rite in the Diocese of Saginaw.

“From the beginning, in my talks with the leadership community of the Saginaw Latin Mass Association, I expressed my strong desire for the group to become part of the Holy Family Parish community,” Bishop Gruss said. “I don’t simply want to provide a home that is used and not supported … that would cause a fracture in the Body of Christ. Rather, I would like to see one united parish community which offers two different opportunities for the celebration of Eucharist.”

Father Prentice Tipton serves as pastor of Holy Family Parish and celebrates Mass there each week. Several priests from the diocese who are trained will celebrate the Extraordinary Form on a rotating basis.

“I am excited to welcome everyone to participate in the celebration of the Extraordinary Form of the Roman Rite,” said Father Christopher Coman, pastor of St. Christopher Parish of Caro and Mayville. “I look forward to offering this Mass for those who are devoted to it and also for the faithful who are new to it or are curious.”

Information about the Mass, including what to expect, will be posted at Holy Family Parish’s website at holyfamilysaginaw.org. A worship aid for the Mass will also be provided. Holy Family Church is located at 1525 S. Washington Ave. in Saginaw.

“People are often drawn to the Gregorian chant, extended periods of silent prayer, more frequent use of incense and other aspects of the Mass, which some find very helpful in orienting them towards prayer and thanksgiving,” Storer said. “My teenage sons are very drawn to the Extraordinary Form of the Roman Mass. We don't always know why this Mass is attractive to the youth but we see many young charismatic youth and young large families at these Masses.”

In addition to the first Mass in December, Mass in the Extraordinary Form has also been scheduled for Sunday, Jan. 10. Father Marcel Portelli will celebrate the Mass at Holy Family Church.

About the Extraordinary Form of the Roman Rite

The Extraordinary Form of the Roman Rite is sometimes referred to as the “Traditional Latin Mass” or the “Tridentine Rite.” However, both terms are misleading. The Holy Mass has been celebrated by the Church since the time of the Apostles. The Last Supper of Jesus is the origin of our tradition.

There have been legitimate variations of the Roman Rite over the centuries. The Mass was celebrated in Greek until the fourth century, which is why we continue to chant or recite in Greek “Kyrie eleison,” which is “Lord have Mercy” in English. In 1570, after the Council of Trent and the invention of the printing press, Saint Pope Pius V promulgated a new Missal for the Roman Rite. Since this new Missal was promulgated after the Council of Trent, it became known to many as the “Tridentine Rite” of the Mass.

The last revision of the Roman Missal of 1570 was promulgated and published in 1962.

In 1970, Saint Pope Paul VI promulgated the Missal for the Roman Rite. The prayers and rubrics were revised, and that is what we refer to as the Novus Ordo, or the new order of the Roman Missal. There were still some small groups and elderly priests who were permitted to continue to celebrate the Mass in Latin using the Roman Missal from 1962.

In 2007, Pope Emeritus Benedict XVI approved the celebration of the Mass using the Latin Missal from 1962 for any priest who could demonstrate that he was prepared in the Latin language and the rubrics of the Mass from 1962.

The celebration of the Mass has varied in ritual practices since the time of the Apostles. However, the mystery of the Mass is the action of God — through the consecration of bread and wine into the Body and Blood of Jesus — and, in that, there has been no variation.

When Pope Emeritus Benedict XVI permitted the celebration of the Mass according to the Missal of 1962, he simply extended a permission that already existed. In order to make it clear that there is only one Roman Rite, he made use of the appropriate terms “Ordinary Form” of the Roman Rite, indicating that is the ritual most often celebrated in the language of the people and “Extraordinary Form,” which is the celebration in the Latin language, and the ritual that was in place in the Roman Missal of 1962.

“We are fundamentally united in worship of Our Lord Jesus Christ in the Holy Eucharist,” Bishop Gruss said. “The Holy Spirit is who unites us with Jesus Christ.”