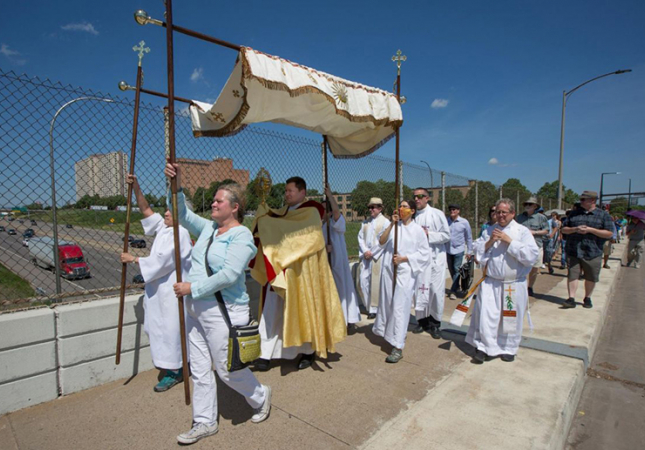 Father R.J. Fichtinger of St. Thomas More Parish in St. Paul, Minn., carries a monstrance with the Blessed Sacrament over the Interstate 94 bridge in St. Paul June 6, 2021, during a procession that began a mile away at St. Peter Claver Church to celebrate the feast of Corpus Christi. Mass was celebrated at St. Peter Claver, followed by the procession. (CNS photo/Dave Hrbacek, The Catholic Spirit)

The short stop on the bridge was part of a joint event by St. Thomas More and St. Peter Claver parishes to celebrate the feast of Corpus Christi, the body and blood of Christ.

As he stood looking down at the freeway from the overpass, he was well aware of the fallout that took place more than 50 years ago when a thriving African American community in St. Paul was geographically split by the construction of an interstate highway that many in the community did not want — a move that still stirs emotions today.

Awareness of that history is precisely why the march south from St. Peter Claver to St. Thomas More just over a mile away paused briefly on the bridge: so people could pray for peace and healing.

“It’s a good drop in the bucket,” Father Fichtinger said of the overpass prayer. “There’s a lot of work that needs to be done, and no single action will be the action that undoes years of challenges and fighting and pain. But it is a good step in the right direction.”

The idea for the two parishes to come together for Mass at St. Peter Claver and a eucharistic procession afterward came from the pastor of St. Peter Claver, Father Erich Rutten, who called the event “a gift of the Holy Spirit.”

“We have been working with St. Thomas More for several years on racial reconciliation,” Father Rutten told The Catholic Spirit, newspaper of the Archdiocese of St. Paul and Minneapolis. “And so, it came to me that this (procession) … could be a sign of unity. … It’s for Rondo, but it’s also for our country — for racial reconciliation and peace. We want to just ask the Lord to bless us with unity and peace.”

Dozens of people from both parishes, ranging from toddlers to the elderly, joined the procession, with St. Peter Claver’s Cameroon choir providing lively music all the way through. It ended on the steps of St. Thomas More, where Father Fichtinger raised the monstrance and blessed the crowd.

“I loved the procession,” said Nicola Alexander of St. Peter Claver, whose daughter joined her and was an altar server at Mass. “It shows the joy. I think it’s about the joy of the body of Christ.”

Two months earlier, the two parishes hosted prayer gatherings during the trial of former Minneapolis police officer Derek Chauvin, who was convicted of murder April 20 in the death of George Floyd May 25, 2020. The two parishes also have shared book studies and discussion sessions focusing on racial justice. Alexander, who has been a member of St. Peter Claver for the past 21 years, has participated in the discussions.

Teklay Hashel, also a St. Peter Claver parishioner, attended the Mass and procession with his wife and daughter, Inedi, who marched near the front with two other young girls, all of whom wore white dresses. He recalled taking part in eucharistic processions in his native country of Eritrea, and is glad to be continuing the tradition in the U.S.

He moved to the United States in 1993 and joined St. Peter Claver shortly after he arrived.

“I’m really so happy to see it,” he said of the procession. “It felt like Jesus was with us. … It was good to see two churches united and celebrated for one aim — for Jesus.”

Father Fichtinger said processing with Catholics from the two parishes was “an incredible experience of just witnessing the body of Christ, being able to see how our one tradition can still unite us, even though we have some cultural differences.”

“There’s so much in our current events that makes us feel helpless,” Father Rutten added. “We don’t know what to do. It (racial injustice) seems bigger than anything we can do.”

But, coming together to pray and bring the Eucharist into the Rondo neighborhood “is a big way to say, ‘Lord, we ask for your blessing, we ask for your power, we ask for your intervention to bring peace and healing,'” he said. “I don’t know what the result of that will be. I just give it to the Lord and ask God’s blessing.”