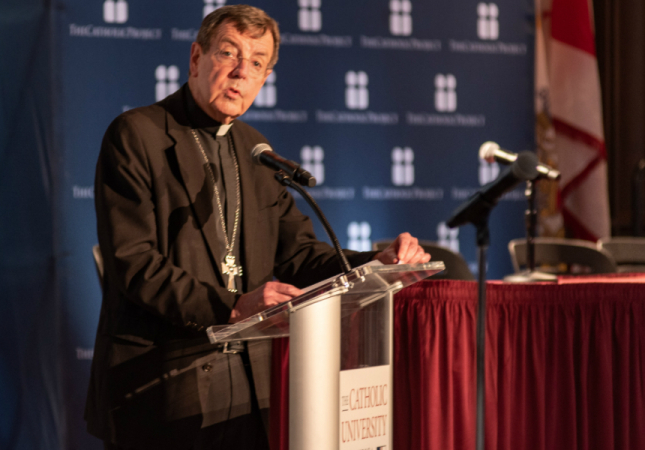 They professed resolve to continue to work to defend unborn human life and support pregnant women in need. Some called for prayer and fasting and emphasized that millions of lives are at stake.

On Election Day about 56.7% of Michigan voters, more than 2.4 million, voted for Proposal 3 to add a broad right to abortion into the state constitution. It removes a longtime ban on abortion from state law that has not been enforced since 1973. The margin of victory was more than 580,000 votes.

“This is a tragic day for Michigan and for the cause of protecting and upholding the inherent dignity of all human life,” Archbishop Allen Vigneron of Detroit said in response. “Despite the tremendous hurdle this constitutional amendment presents, we will continue to support policies that uphold parental rights and the sanctity of human life as well as those that offer assistance to women in need.”

“As people of faith who witness to the Good News of Jesus Christ and his teachings, we are deeply saddened by this grave assault on the dignity and sanctity of unborn, innocent human life,” he continued. “We grieve for the many women who will continue to be harmed by abortion in our state. And most importantly, we grieve for the lives that will be lost because of this unjust and perverse law.”

Vigneron continued: “Abortion is now legal in Michigan at an unprecedented level, and millions of lives are at stake. We must pray and ask God for his mercy upon us for allowing this evil to happen in our state.” He called for the Catholic faithful to join him in penance, prayer, fasting, and almsgiving in the first two weeks of Advent, Nov. 27 to Dec. 9.

“We must use these spiritual practices to make reparations for the great sin of abortion in our midst,” the archbishop said.

Bishop Robert Gruss of Saginaw also lamented the outcome and emphasized the extreme nature of the amendment.

“Today, Jesus looks over the State of Michigan and weeps,” he said. “We weep with him. Enshrining the right to take the life of an unborn child into our state constitution is an abomination to him.”

“With deep sadness in our hearts, we acknowledge, however, the reality that a majority of Michigan voters have embraced, as a fundamental right, taking the life of an unborn child in the womb through all nine months of pregnancy and taking away parental rights in the process,” the bishop said.

Despite the “heartbreaking and difficult defeat,” he emphasized the need to protect human life at all stages. He added: “The reality of Jesus’ Resurrection teaches us that, in the end, life prevails.”

The two Michigan bishops noted efforts to support pregnant women in crisis pregnancies, such as the ministry Walking with Moms in Need, and also ministries such as Rachel’s Vineyard, which help women who need healing after an abortion.

In California, the strong pro-abortion-rights constitutional amendment Proposition 1 was projected to win. As of Thursday evening, it had 65% of the vote, with more than 3.5 million individual votes in favor.

“While this is tremendously disappointing, and not the outcome we have been working toward and praying for, there is still much to be proud of and thankful for,” the California Catholic Conference said after the election.

“We have responded to our Gospel call to serve on behalf of the most vulnerable and to share the love of Christ Jesus,” they added, emphasizing that God “sees our work and recognizes our struggle.”

“For the core of our mission as Christians is to evangelize, spreading the Good News of Jesus to the world,” the conference said. “We build up the kingdom of God here in our midst, but our mindset is eternal, with hope for the world to come.”

Archbishop Salvatore Cordileone of San Francisco in a Nov. 9 letter echoed the Catholic conference’s statement and thanked priests and lay Catholics who opposed the measure in word and deed.

“While the passing of Prop. 1 is devastating for women, children, and families in California, there are some positive developments,” he said. “By shining a bright light on the value of motherhood and the inherent dignity of the unborn child, our hard work helped to shift minds and hearts to the pro-life movement.”

Both Cordileone and the Catholic conference cited a survey from Rasmussen Reports and the California-based Capitol Research Institute, which found that the number of Californians who identify as pro-life increased by nearly 10% during the campaign. The number of self-identified pro-choice Californians dropped by 7 percentage points.

However, Cordileone noted that voters had approved an extremely permissive abortion law.

“It is bad enough at any time, but this amendment will allow abortion even up to the day a healthy mother can give birth to a healthy baby,” he said.

“While Prop. 1 will inevitably be challenged in the courts, we will continue to do our essential work of accompanying mothers in distress through lifesaving crisis pregnancy centers and our post-abortion healing ministries,” he said.

“As people of faith, we know that peace in the world begins with peace in the womb,” Cordileone added. “This spiritual battle will continue as we look ahead to the day when abortion will be unthinkable in every state in our nation.”

In Vermont, Bishop Christopher Coyne of Burlington said the passage of the pro-abortion Article 22 was “deeply troubling and tragic,” though he said the state was among “the most pro-choice of states.” As of Thursday, 77% of voters had backed the measure to create a constitutional right to “reproductive autonomy.”

“As a result, no future laws or restrictions that protect the life of the child in the womb may be enacted by the legislature or government. This certainly does not bode well for the future,” he said, nonetheless encouraging Catholics to help build “a greater culture of life.”

In Montana, voters rejected Legislative Referendum 131, which aimed to provide state protections and medical care for babies who are born alive after attempted abortions. It is similar to the federal Born Alive Infant Protection Act of 2002. As of Thursday, the vote margin was 52.55% to 47.45%, about 21,000 votes.

The Catholic bishops said they were “saddened and disappointed” by the defeat of a proposal “which sought to legally protect the dignity of babies at the time of their birth.”

“We will continue to advocate for laws that uphold the dignity of every human being and their right to be recognized as a person from the moment of conception until a natural death,” the Montana bishops said.

The Catholic bishops of Kentucky said they were “disappointed” by the rejection of Kentucky’s Amendment 2, which would have declared that there is no right to abortion in the state constitution. Voters rejected it by 52.4% to 47.7%, a margin of about 67,000 votes.

Backers of the amendment said it was needed to ensure that the state Supreme Court never finds a right to abortion in the constitution.

“This is not the end of the debate or of the need to work diligently to increase respect for the dignity of each and every human life,” the bishops said. “We pray that the defeat of the amendment will not lead the courts to assume the role of determining public policy on abortion. The General Assembly is the proper venue to settle such deeply divisive issues.”

Republican partisans and some pollsters had forecast a “red wave,” referring to the color now associated with the GOP.

“This night is not turning out exactly like the red wavers predicted so far,” MSNBC host and former Biden White House Press Secretary Jen Psaki said on Twitter Nov. 8.

This drew a response from the outspoken Bishop Joseph Strickland of Tyler, Texas.

“You’re right Ms. Psaki,” he said. “Instead the red waves are the blood of innocent unborn children your friends are unleashing across our land. Tragic, deeply tragic, for us all.”

The New York Times, citing the ad-tracking firm AdImpact, said Democrats spent nearly $500 million on ads that mentioned abortion this political cycle. This was more than twice what they spent on the next-closest issue, crime.